I have been invited by Titan travel to be a part of their “Twelve Days of Blogmas” along with eleven other food and travel bloggers. Each of us are representing one of the twelve days of Christmas with a wonderfully festive recipe inspired by our travels and experiences at a number of famous European Christmas markets.

Titan Travel is one of the UK’s leading travel companies, creating hand-crafted escorted tours for British holidaymakers since 1978. There are so many countries that celebrate authentic festive food and drink through their traditional Christmas Markets and “The Twelve days of Blogmas” bloggers are here to show you how you can re-create some real Christmas themed treats at home.

Having travelled to northern Spain this summer and with thoughts of returning for another Spanish holiday experience, I have chosen to focus on the incredible Barcelona food scene and their renowned Christmas markets. The markets otherwise known as “Firas” are spread out over Barcelona. Fira de Santa Llúcia, the largest of the markets, is set under the city’s Gothic cathedral. Fira de Nadal de la Sagrada Familia is set in the beautiful location of Barcelona’s most famous cathedral designed by Antoni Gaudi. Fira de Reis de la Gran Via, has a huge collection of Christmas stalls and this is the place to try out THE classic churros served with chocolate dipping sauce. Collectiu d’Artesans d’Alimentacio  is set below the church of Santa Maria del Pi. The Mercat Gotic – Fira des Brocanters is actually open all year round but the market adds many festive touches and stalls for the Christmas period. 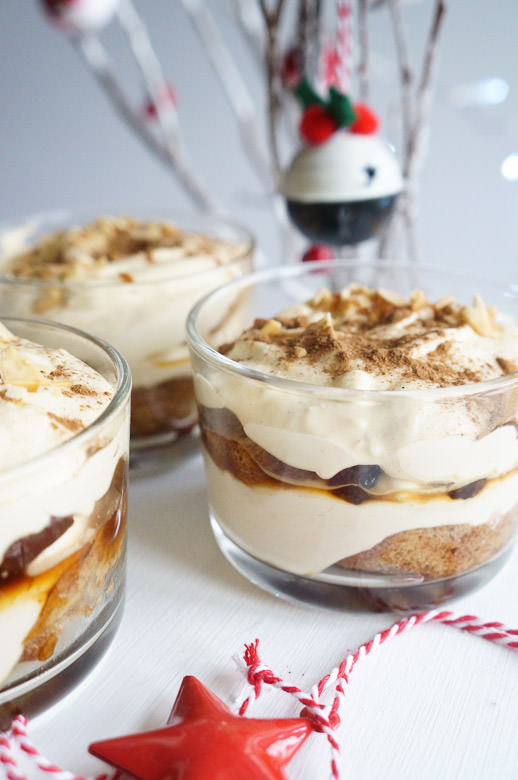 One of the foods that is traditionally enjoyed in Spain over the Christmas period, as well as being a popular foodie gift of choice,  is Turron – a Spanish nougat made form Marcona almonds and honey. There are two types of Turron. Hard and crunchy or soft and chewy. Which you prefer depends on your personal preference much the same as if you prefer a soft chewy cookie or a crisp, crunchy biscuit.

My Spanish Turron Tiramisu uses the soft Turron otherwise known as Turron blando. The almonds are finely ground and blended with rosemary honey. This type of Turron works particularly well in soft blended desserts such as mousse, ice cream or cheesecake. I decided to make a Spanish Turron Tiramisu – a dessert I love to indulge in at Christmas time. I always favour a fluffy cloud-like tiramisu over a  traditional Christmas trifle.  I hadn’t cone across a recipe for a Spanish Tiramisu, so I thought I would recreate one myself using Pedro Ximenez sherry soaked raisins  with the smooth, sweet nutty Turron.

I hope this recipe gives you a little taste of what the Spanish Christmas markets have to offer and if you are heading out to Barcelona this Christmas do try and seek out some Turron for yourself and maybe even whip up a Spanish inspired tiramisu as one of your festive desserts this year.

This delicious almond and sherry dessert benefits from being chilled in the fridge for a couple of hors before serving. Buy the best Spanish Sherry you can find for this recipe.