Having spent so many years as a family holidaying in France, it made such a welcome change venturing into Italy this year. We explored the Italian Alps (lots of hiking and camping) followed by some leisure time on beautiful Lake Orta and drove home via Switzerland.

I couldn’t believe how much cheaper Italy is to France. Throw camping into the mix and several campfire meals and we must have saved hundreds of pounds – result!

What Italy did, in terms of food, was re-ignite a real enjoyment of eating pasta and pizza. At home I have got into the habit of treating both of these foods as children’s meals that are quick and easy to prepare; i.e. perfect after school fuel.

But in Italy we all feasted on the freshest of pasta. Parcels filled with meats, cheeses and vegetables, fat dumplings of potato gnocchi and the crispiest, lightest pizzas topped with treats such as Italian sausage, turnip tops, wild mushrooms, Fontina cheese and truffle oil.

Another favourite of mine, which I had forgotten about, is the Italian breakfast spread. Instead of a selection of viennoiserie, you will find sweet breads, marmalade and apricot filled croissants, nutella filled rolls, hundreds of tempting little biscuits and best of all – Crostata. 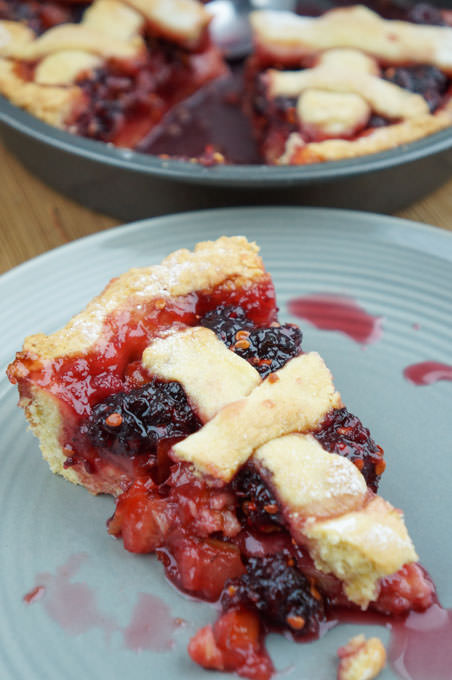 Crostata is a sweet pastry tart filled with  jam and baked until it is crisp, but it’s also cake-like. The pastry is enriched with egg and lightened in texture by the addition of baking powder so it is crumbly yet cakey yet pastryish all at the same time and I love it. Apricot is the most popular of fillings but you do see red fruit versions too.

I am so grateful that I’m able to eat wheat, as I ate little else in over two weeks and wouldn’t have it any other way. In fact it was really quite liberating to eat bread for lunch followed by pasta or pizza every day and feel neither bloated nor bored by it. It’s so far off trend in food terms now isn’t it? But it was good while it lasted and I’m sure I’ll be splurging on pasta again next summer but for now I give you a most British of crostatas, my Autumn mulberry and plum crostata.

The recipe for the crust is based on this one by The Wednesday Chef.

If you are just using jam in this recipe you can keep the crostata out of the fridge. It will keep well for up to a week.