I have been making biscuits for as long as I can remember. It is often one of the first recipes  that children learn to cook along with fairy cakes or a Victoria sponge. I will often knock up a batch of biscuit dough for the children to roll, shape and ice during the school holidays but I have always been slightly disappointed with the flavour of a basic baked vanilla biscuit.

The trouble with most vanilla biscuit doughs is that they often don’t have enough snap and crunch, going soft within hours of baking, and they usually just taste – dull. I suppose in some ways, they rely upon the adornment of a sticky sweet icing and the odd sprinkle or two. But a good butter biscuit should surely still be something to enjoy without these added extras? 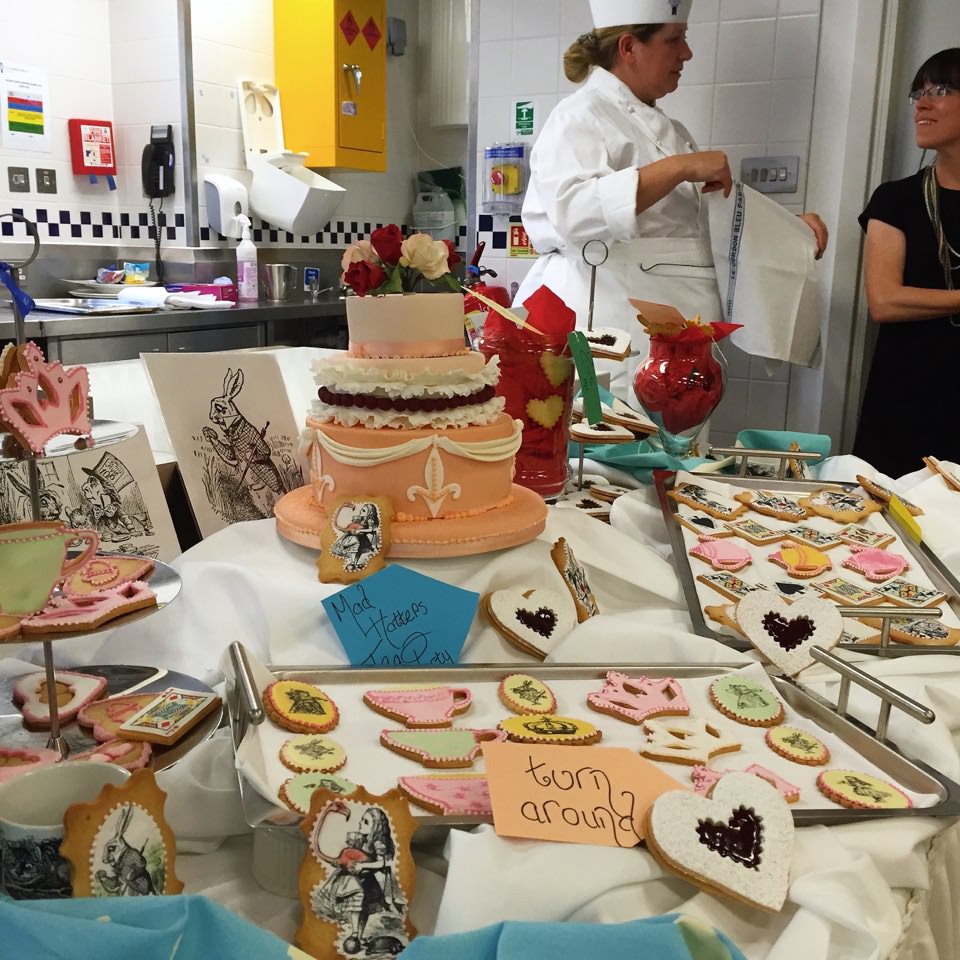 The Alice in Wonderland themed patisserie demonstration and tasting taught by Julie was without doubt one of the best classes I have ever attended. As a cookery tutor and food blogger, I do get invited to numerous food events, many of which I turn down. The ones I generally choose to attend are those taught by other top chefs such as THIS one.

I am always interested in seeing how other chefs and cookery teachers teach. This is a very different skill to being able to cook and both don’t necessarily go hand in hand. After all, chefs go to cookery school to learn practical skills and teachers study very hard to gain their PGCE’s. One doesn’t often hear of chefs going to chef/cookery teacher college, so becoming a good cookery teacher is a skill that comes with both knowledge of your profession and excellent communication skills. 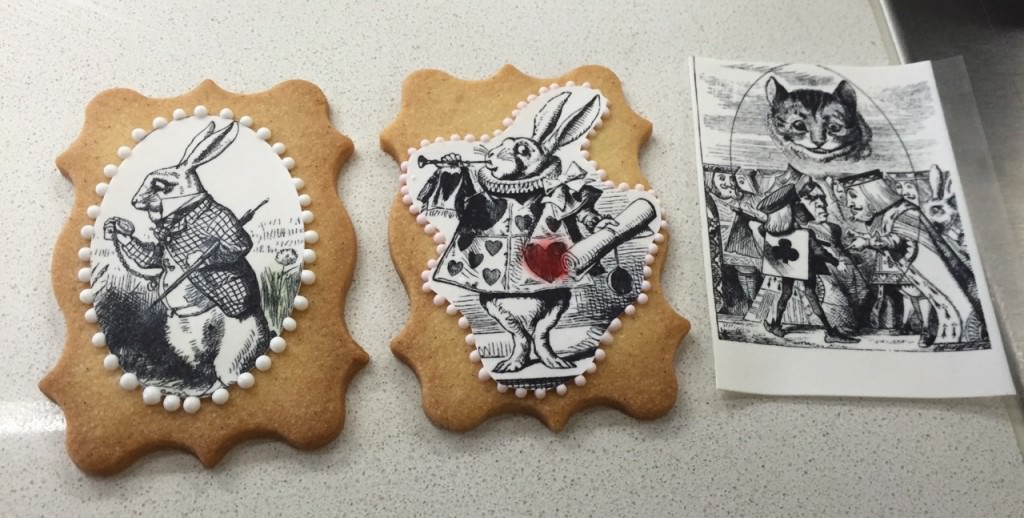 Julie has all the skills in both her professionalism and her ability to communicate well to a room  full of guests, including several children – the course was about Alice in Wonderland after all. She was able to talk about the skills and techniques required to make beautifully decorated biscuits but Julie also got the children involved by coming up to the demo table to help out and by talking about her son who is a keen helper in the kitchen, and a very good biscuit maker himself. There were also freshly baked biscuits and refreshments as well as colouring in sheets for the children to hand. 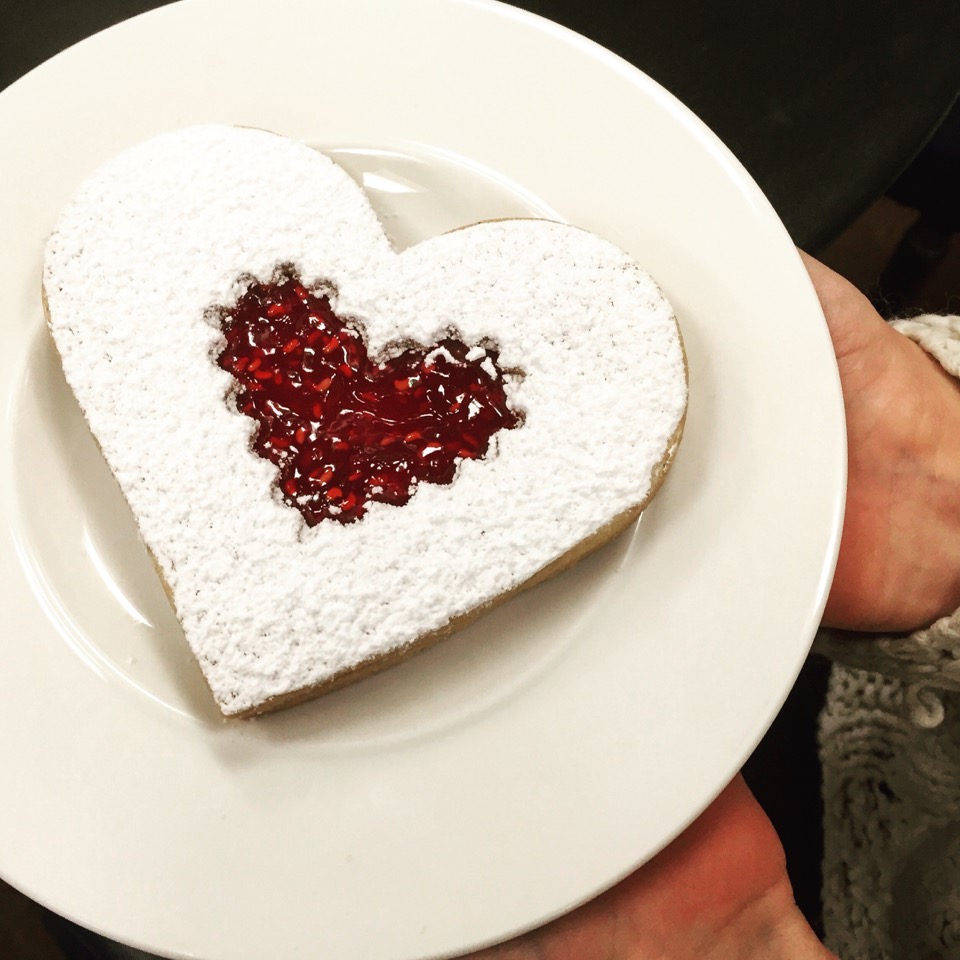 Julie made The Queen of Hearts Jam Tarts and Alice’s Iced Biscuits during the session, like no other biscuits I have ever seen before. She also made the raspberry jam which filled the jam tarts (Jammie Dodgers) and dusted the finished biscuits with icing sugar whereas Alice’s Iced Biscuits were coated in Royal icing and decorated with incredibly beautiful stamps dipped in edible ink which made the biscuits look like they had been hand illustrated. The level of intricacy involved in the decoration of these biscuits was on another level – one that I have never seen before. I wish I could enrol on one of Julie’s patisserie making courses to absorb just a little of her expert knowledge.

Every so often Le Cordon Bleu do run cookery courses for parents and children from the ages of 8-12. There is a course running in February 2016 and the idea is that you and your child get to learn the tips and techniques of cooking together. This is such a great way to get children interested in what they are eating and provides them with valuable life skills which  will encourage them to cook for themselves ands others; maybe even inspiring some of their friends to get cooking.

Here are some of the invaluable tips I learned from Julie Walsh:

-Using plain flour (which is low in gluten) in these biscuits keeps them short and crumbly.

-Sieve your flour straight onto a piece of baking paper then all you have to do is pick up the paper and pour it straight into the mixing bowl. A much less messy experience.

-Never over mix your biscuit dough. As soon as it comes together in the mixer, tip it out onto a surface and finish it by hand.

-Roll out your biscuit dough on baking parchment topped with another layer of parchment paper. This way the biscuits don’t get broken or damaged and can be lifted directly on the paper to the tray.

-Don’t over work your biscuit dough. Too much air will cause the biscuits to spread and may also cause air bubbles in the finished biscuits.

-After the dough has been chilled, break it up with the heel of your hand to get all of the dough to the same temperature which makes it easier to work with.

-Turn the dough after each time you roll it which will help to prevent the dough from sticking to your work surface. Use as little flour as possible as this will affect the flavour of the finished biscuits.

I have been using Le Cordon Bleu biscuit recipe to make my annual Christmas biscuits. I simply added in ground cinnamon, but Julie suggests you could add in mixed spice and swap the caster sugar for brown sugar. I would recommend a No.1 icing nozzle for your piping swirls. I also use a No.1 nozzle for decorating my gingerbread houses.

I am also delighted to be able to share with you the recipe for Le Cordon Bleu Vanilla Biscuits. I will never use any other biscuit recipe again. I hope you will try them and enjoy them as much as I have. It is actually really hard to make a simple butter vanilla biscuit taste as good as this. Richly scented with fresh vanilla seeds, buttery rich with the perfect snap. All a biscuit should be.

I was invited along to Le Cordon Bleu Alice in Wonderland patisserie demonstration (with my daughter) as a guest. I was not required to write a positive review. All opinions expressed are my own.