You are here: Home / Restaurant review / A Trip to Jingogae – A Korean Feast

I am often bemoaning the lack of good restaurants around my area. Having lived in Epsom now for seven years, things have changed relatively little and if I want to enjoy a really good night of fine food I will simply hop on the train to London.

I have no excuse at all though for not having visited New Malden’s finest, Jingogae. A mere fifteen minutes away from me by train. Korean food of such quality has been on my doorstep for six years.

An invite to celebrate Jingogae’s sixth birthday by Korea Foods has changed my Korean eating habits for good. For so many reasons, which I will go into later, this authentic neighbourhood restaurant is what I have been desperately seeking. Flavour, zingy chilli heat, kimchi, gochujang (chilli bean paste), bibimbap (Korean rice based dish), bbq meats, tofu, seafood pancakes, pickles, noodles and Soju (A Korean national spirit, like vodka but made with distilled fermented rice). 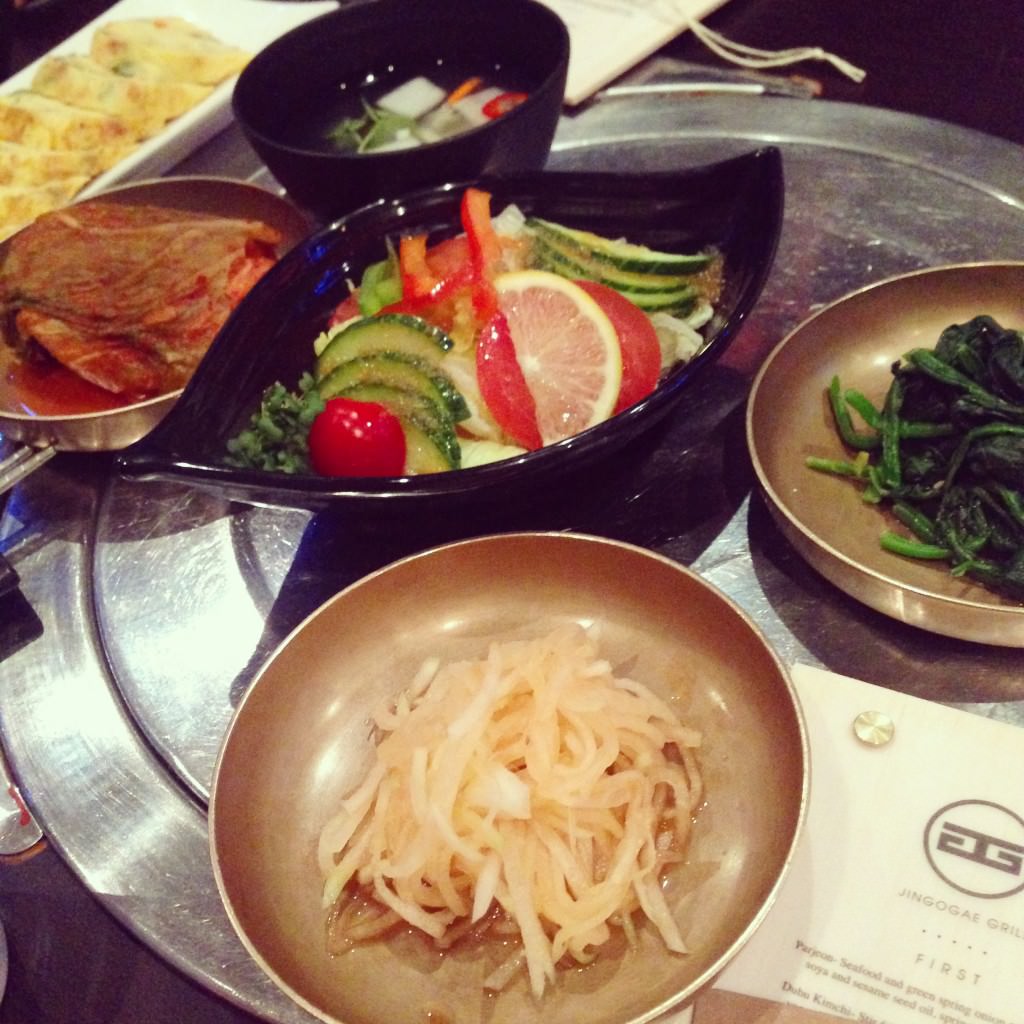 The menu was something to behold. It featured every single one of Korea’s finest dishes for us to enjoy:

There were a few new discoveries for me on this menu:

Japchae- the sweet potato noodles were cooked with just enough bite and were light and delicate with a sweet background note from the marinaded beef.

Tteokbokki- soft rice cakes. Again I had heard of these but not tried them before. They were almost squid like in texture, like fat slithery cylinders which absorbed the flavours of the thick, sticky sweet chilli glaze  perfectly.

Dubu Kimchi-as a lover of Kimchi, this dish lifts it to another level entirely. I have only eaten cold kimchi before. But, served warm and stir-fired with thinly sliced pork and steamed tofu it becomes a dish with real addictive properties. An umami sensation if ever there was one.

Parjeon- a seafood and green spring onion pancake would convert any Korean food sceptic in such a way that they would be dreaming about the next time they could lay their hands on this delicacy. Hot, crisp, crunchy and savoury. It is impossible to refrain from eating every last scrap. This was the dish I noticed that disappeared in milliseconds and should be the next biggest food discovery.

Chestnut jelly- I couldn’t see this on the menu but there were long cubes of chestnut jelly, so delicate, acting as a sponge to soak up the array of addictive dipping sauces. It seems that Korean food has an affinity to jelly like textures along with chilli heat and  a pickled sharpness. I love the audatiousness  of Korean food, yet it is also well balanced, fresh and includes plenty of salads and crunchy vegetables. The food is as bold visually  as it is in taste.

The Korean style of serving marinaded meats cooked at your table which has a bbq set within it is truly special. The beef short rib and tri-tip steak (the lower part of the sirloin, just above the flank) are both well marbled cuts of beef which have been marinaded by Mr.Cho, so that the beef is incredibly tender and sizzles in seconds on the hot coals. The best part of eating this beef  is the revelation of dipping the meat in a combination of sesame oil and salt before wrapping it in a lettuce leaf with slivers of raw garlic and crispy fried spring onions and a rich chilli bean paste. Dan, MD of Korea foods had told me about this when I interviewed him. He was so right, this is by far the best way to enjoy a good piece of beef.

Marinaded butterfly cut pork and three layer pork belly were cooked in the same way but served with a soy and vinegar sauce, equally as succulent and divine in flavour. Da-Hae, also from Korea Foods, told me that:

“For the unmarinated pork belly, Korean people call it “Sam Gyup Sal.” “Sam” refers to the Korean word for the number 3 – as it usually has 3 layers of fat within it. The fat distribution in Korean BBQ is very important, and tri-tip as well as pork belly has really good marbling which gives it a really good flavour.”

I have made Bibimbap before, the Korean rice dish served in a hot stone. But this was the real deal. Rice topped with a glorious colourful collection of ingredients mixed together with the ever present, and totally addictive spicy chilli paste and served in a sensibly sized mini bowl was impossible to resist, even after the ridiculous amount of food already consumed.

That says it all. Not one single dish was dismissed by us guests. Jingogae offers serious cooking, without any form of pretence. Authentic food presented by the generous Korean hosts Nicole and Sisil who are proud to share their food culture with us and rave about it. I see a bright future for Korean food, and much more of it to come.

I have since become addicted to Kimchi fried rice. There is no finer comfort food. I am convinced of this.

I was invited to this event by Jingogae and Korea Foods. All opinions expressed are my own.