An interview with Dan Suh, MD of Korea Foods and an introduction to Korean foods… 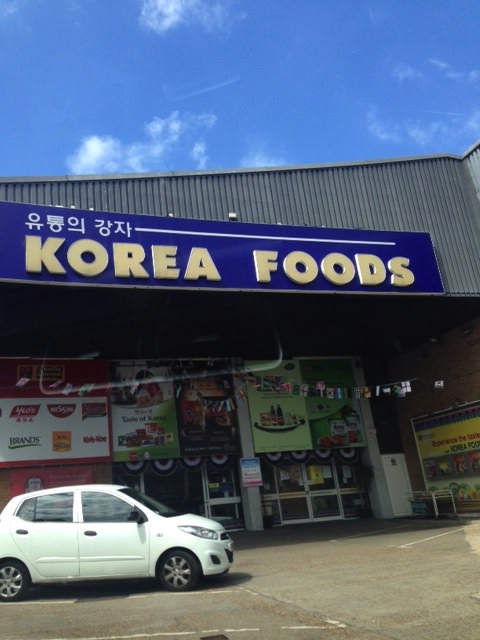 How long have you been MD of Korea Foods?

I originally joined Korea Foods in 2001 but left in 2006 to gain further experience and to expand my knowledge with food manufacturing and sports marketing. This provided me with a better understanding of consumer needs. It also gave me a better understanding of purchasing power, marketing and buying/selecting products for the mainstream market. I was able to grasp how to deal with both the international and European markets, becoming more competent in the successful running of a business. I re-joined Korea Foods in 2012 with a clear strategy on how to take Korea Foods forward and introduce Korean foods to a wider market.

Were you born in Korea or the UK?

I was born here in the UK but my parents were born in Korea and came over here in 1975. My parents opened up Kaya, a Korean restaurant which was originally based in Dean St, Soho before it moved to Mayfair. The restaurant attracted lots of high profile media customers and was a huge success throughout the years but it has now sadly closed and missed by its loyal fans I am sure. My father created Korea Foods as a means to getting a regular supply of ingredients necessary to run a Korean restaurant. He then began to supply to other restaurants and the business expanded. They are now the leading importer of Korean products in the UK.

Are you from a food background?

No, I worked in the world of finance before joining the family business in 2001.

When did you begin to notice more of a pronounced interest in Korean food and was there anything in particular that sparked this interest?

In 2006 Fay Maschler predicted that Korean Food would be the next big thing. The interest has been building gradually ever since then. The street food culture has also helped to make Korean food accessible to a younger audience. The street food guys have managed to combine Korean influence with Western dishes and with a modern twist.

As well as the street food, chefs also caused an impact on the popularity of Korean foods. Gizzi Erskine set up K-Town, a Korean pop-up restaurant. Carl Clarke of Disco Bistro uses Korean influences in his pop-up events. Neil Rankin of Smokehouse is also a Korean food connoisseur and  Stevie Parle even launched a Korean “Seoul Food” menu at The Dock Kitchen.

Naturally, the influence of social media has played a huge part in dictating food trends. Facebook, Twitter and Instagram all play their part in telling us what is on trend in the food world.

I even managed to get some volunteers to help with the Korea Foods stand at Taste of London this year by asking for volunteers on our Korea Foods Facebook page. The response was great, people really got involved which helped the stand do as well as it did. As a company, taking a stand at Taste of London this year enabled us to spread the Korean food word in a big way.

So I would say that the influence of Korean food has been building over the last few years, it hasn’t been an overnight boom but more of a slow and steady build to reach where we are now.

What 5 classic dishes should I try to familiarise myself with Korean Food?

Bibimbap – A rice dish served in a stone bowl traditionally with vegetables, chilli bean paste (gochujang) and egg or meat as added extras. Apparently the colours of the vegetables represent the major organs in the body.

Kimchi – the national dish of Korea. It is a spicy pickled vegetable served as a side dish. The most classic Kimchi is made with Chinese cabbage.

Bulgogi – a dish of grilled marinated meat. Koreans love to eat meat cooked on a BBQ. It is a sociable way of sharing food and one they have adopted as their tradition. The prime cuts of beef are usually marinated in a mixture of soy, garlic, sesame oil and sugar which enhances the tenderness and sweetness of the meat. It can then be grilled or pan-fried. Korean restaurants often have grills/hot plates set up on tables, allowing customers to grill their own meat. It is a fun and enjoyable way to eat with friends and family.

Yangnyeom Chicken – Double fried Korean chicken. This method of cooking the chicken twice takes fast food onto another level entirely. It was created in the 70s and knocks every single other fast food dish out into submission. It is simply awesome. Crunchy, crispy juicy chicken coated in a spicy sauce. Totally addictive.

Doenjang Jjigae –  a traditional Korean style stew made with soya bean paste (doenjang) which is eaten regularly in all Korean households. It  would include vegetables and tofu and soy beans. It is a comfort food dish to Koreans.

What ingredients should I buy from you to be able to make authentic Korean dishes? 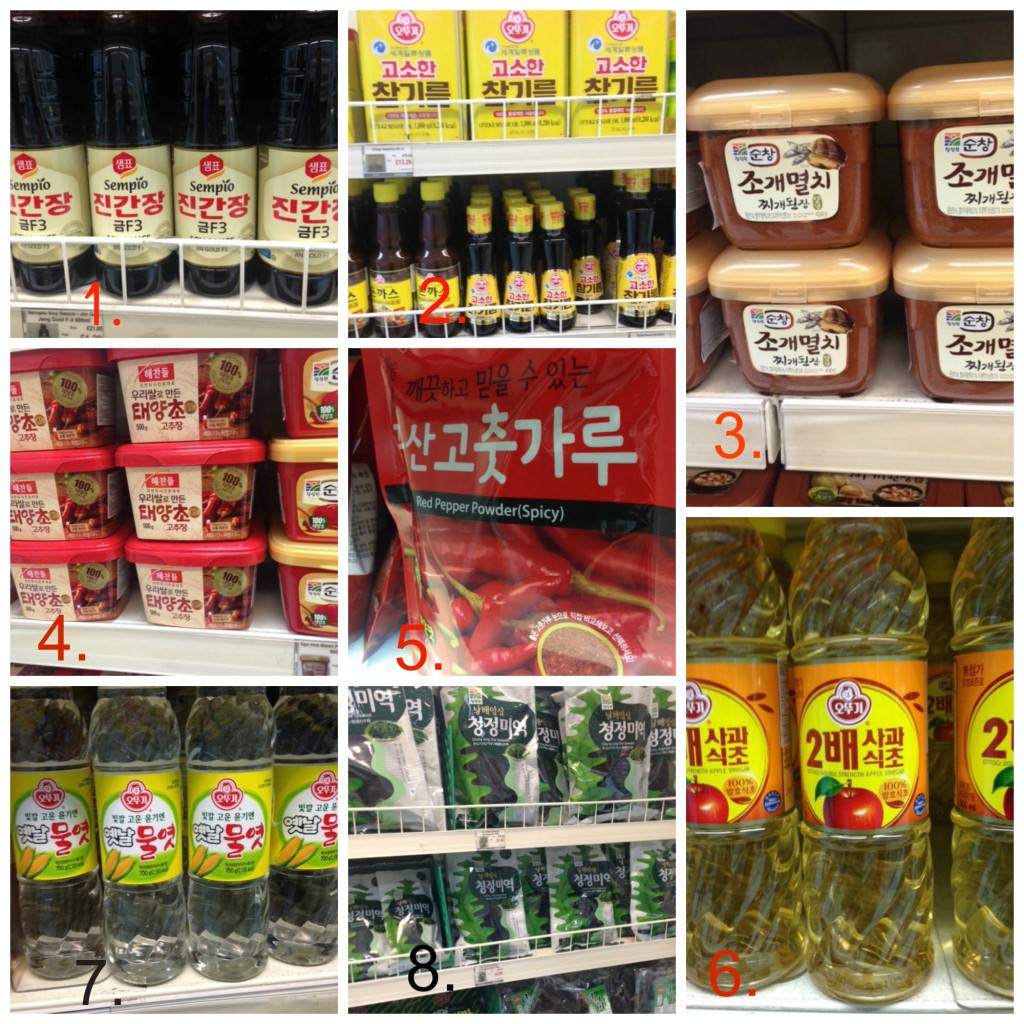 What are your favourite Korean restaurants both locally and in London?

Locally the best restaurant is Jin Go Gae in New Malden. (No website to link to, sorry) The meat is so good. I love the slivers of marbled beef which is then dipped in sesame oil and salt. Makes my mouth water every time. By far my favourite of all the New Malden Korean restaurants.

In London, I reckon the best Korean food can be found at Myung Ga.

Yes, the one I really like is Zen Kimchi written by Joe McPherson. The longest running food blog in Korea. He has written for a number of high profile publications and the blog has grown into a successful business.He is a little more edgy than most bloggers and isn’t afraid to criticise bad food in Restaurants on his blog. He writes about Korean food trends, hosts food events and Zen Kimchi tours including a ghost tour, writes recipes and reviews a whole range of Korean food related places, which can be pinpointed on his “Food Map”. Joe is an honest critic who writes about the real life happenings in Korea.

Do you have a favourite Korean chef?

I have two, neither of whom is based in Korea.

Hooni Kim – Korean born but raised in New York. He studied medicine before realising he wanted to cook for a living, then went on to train at The Culinary Institute of America. He worked at two Michelin star restaurants, Daniel and Masa before setting up Danji, serving high class Korean food.

Judy Joo – Judy perviously worked in banking, having studied at Columbia university. But, like Hooni, changed career path and also went on to study at The Culinary Institute of America. She went to work for Gordon Ramsay before becoming executive chef at The Playboy Club. She is also an Iron Chef and will be judging on the next series over on The Food Network. She also has her own TV show coming up on the channel – Korean Food Made Simple – and there is talk of her opening up a restaurant in London this year. Busy and talented lady.

How would you describe Korean cuisine?

What are your plans for Korea Foods?

There are loads of things happening here at Korea Foods.

We are bringing new Korean products to the British consumer. We are currently developing a range of healthy authentic Korean sauces.

There will soon be an online store providing Korean products to the UK consumers. We want our products to be much more widely available.

Plans are in place for a number of Oriental convenience stores.

KoreanBelly.com is an online hub/community that is our Korean food portal. It is a place to find everything you have ever wanted to know about Korean food brought to you by chefs, bloggers and food connoisseurs. There will be restaurant/product reviews, recipes, advice on the best places to eat. A place to share information. This portal is currently under development but it should be going live within a month or two.

As a second generation Korean, I see the Korea of old and the new working together. Koreans are technologically advanced yet also steeped in tradition. We embrace authenticity but can also adapt to being contemporary.  We are unique. 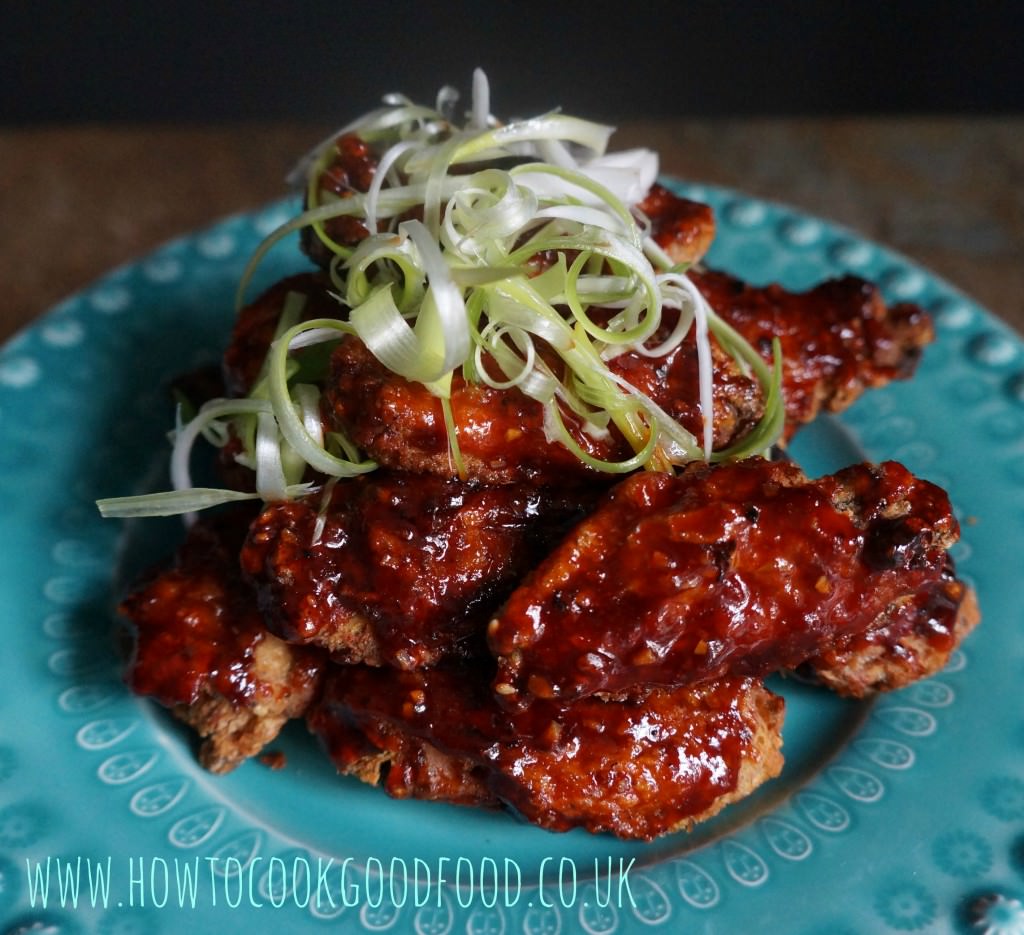 After meeting the MD of Korea Foods, Dan Suh I was taken around the store by Kimberley, snapping photos of the essential Korean ingredients listed above. I bought all these essentials and some very good in-house made sushi too.

But what stuck in my mind after my chat with Dan was the fried chicken. Double fried crispy, spicy, crunchy Korean chicken. I know that he knows his food and I know that I know I just had to make that chicken.

It is incredible. The best. Supremely superb.

After reading numerous debates online about how to achieve the perfect, most undeniably crisp skin I discarded them all and went with the theory that if you cook chips twice and they turn out crispy and the potatoes haven’t been left to air dry for 24hours, why should I leave my wings to air dry? I just want to eat the chicken, NOW. So, I did.

The only preliminary step I took was to thoroughly pat dry my wings (I didn’t wash my chicken but Maangchi did) with plenty of kitchen towel on both sides. I did this twice. I also wonder if pouring boiling hot water over them as you would do for pork crackling might work?

As this was my first ever time of making Korean fried chicken I haven’t adapted the recipes at all so I am not publishing my own version. My main aim was just to try and enjoy the dish. My own version will appear once I have got to grips with the whole range of Korean ingredients. This will take time so watch this space.

I would like to thank Dan Suh for taking time out for my interview. Dan is someone who is making things happen, in a big way. I for one, am very happy to watch him succeed. 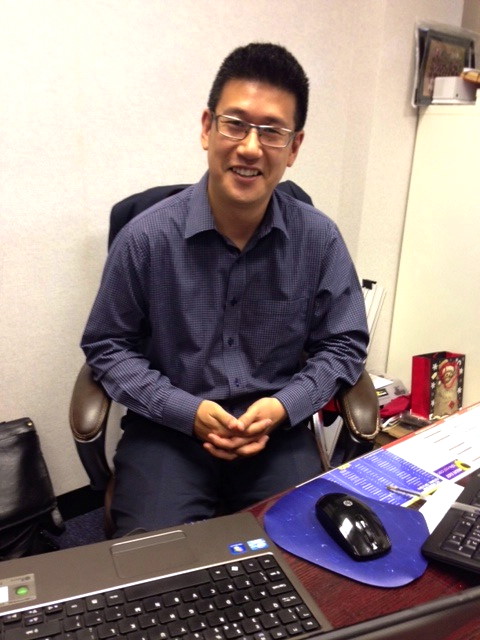 I was not paid to write this interview. I arranged it purely out of interest in Dan Suh, his company Korea Foods and a genuine interest in learning in about the Korean food culture phenomenon.