After a week of Cornish food, I have found myself eating lots of lighter foods this week. Less cream and chocolate and more vegetables and salad. After a quick trip to the allotment, I was presented with some fat leeks,crisp spring onions and a bunch of colourful rainbow chard.

The chard I tend to fry off in olive oil, garlic and a touch of chilli and eat it as a side dish or throw it into a dhal, curry or stew. I always cook the stems for five minutes before adding in the chopped up leaves which only take a minute or two to soften.

The leeks and the spring onions, I thought would be perfect in so many ways. Risottos, roasted in oil, chargrilled, added to a spring vegetable pizza………….But after a rumble through the freezer I came across a nice big pouch of chicken stock, so broth it would have to be. A stock based soup in which I have poached the spring vegetables with addition of a couple of garnishes.

For this soup, I like to cook out the leeks so that they blend in and begin to break down into the stock  before briefly blanching the remaining vegetables for a contrasting crunch and freshness of taste. Another two tasty additions are home-made croutons and generous amount of freshly grated Parmesan. This provides a real umami hit, bringing it to life so much more than simply adding salt. 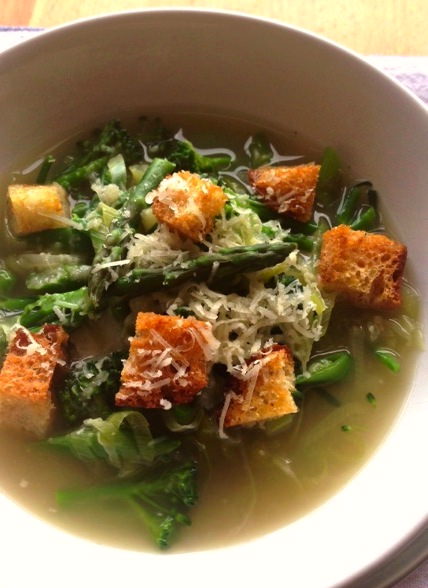 This simple, thrifty, delicate vegetable laden soup will be added in to several of the monthly blogging challenges for April which are as follows: