You are here: Home / Meat dishes / Chicken and Rice – with a kick
Jump to Recipe Print Recipe

The inspiration behind this truly tongue tingling, spicy chicken dish is the cook and food writer Fuchsia Dunlop. She specialises in writing about the food of China and has written books on the subject as well as writng articles for newspapers and magazines. I came across a recipe of hers on her blog, www.fuchsiadunlop.com which I have been dying to try out for a while now and last night I did, well sort of. 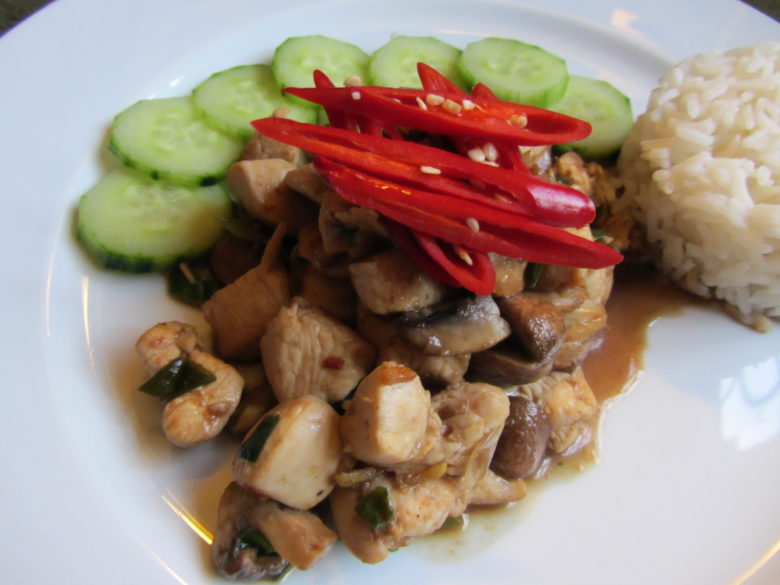 As Mr.Scott was out last night I thought I would treat myself to a Chinese meal, but one that I cook for myself. I  am , to put it bluntly, not the biggest take-away fan. And, I am a quick cook so it’s DIY for me all the way!

The recipe which appealed to me  is called “Gong Bao chicken with peanuts”, also known as “Kung Pao chicken”. Now, I am not claiming to have made this exact dish but simply my interperation of it based on which of the ingredients I happened to have in the store cupboard. Apologies to Fuchsia Dunlop if she thinks I have completely ruined her dish!

Firstly, what I did not have were peanuts.  Secondly, no potato flour, Lastly,  no Chinkiang vinegar.

I decided to skip the nuts, add cornflour and replace Chinese vinegar with balsamic. I added some chestnut mushrooms, which I love too.

What I absolutely adore though, and what I did happen to have were the tiny dried bird’s eye chillies and the Szechuan pepper. If you haven’t had the pleasure in tasting a dish with this particular pepper berry, then please do so! It is like nothing else. The flavour makes your mouth tingle but it is also highly aromatic and combines brilliantly with the heat of the dried chillies. Have I sold it to you, or are you going to stop reading right now?!

My worry about posting this recipe is that you may not like the sound of the heat and tingle sensation. So, to reassure you, I do believe the dish would taste pretty good without the Szechuan pepper and the dried chilli. It would just be a milder, less dazzling affair. Go on, live a little and give it a try……….!!!

Chicken and rice - with a kick

To assemble the dish:

« Summer salad of fresh peas, pancettta and avocado with a Caesar style dressing
Breakfast in Bread »